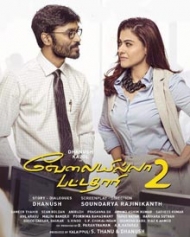 Velai Illa Pattathari 2 (VIP 2) is a Tamil action, comedy movie direction by Soundarya Rajinikanth, movie to be produced by Kalaipuli S Thanu’s V Creations and Wunderbar Films. VIP 2 is sequel to Velai Illa Pattathari. The movie has Dhanush in the male lead role and he also takes care of story and dialogues.
Story
The story of VIP 2 starts an year after the point where the first part ended. Raghuvaran (Dhanush) now a successful Engineer, married to his lover Shalini (Amala Paul).
The most successful entrepreneur and architect Vasundhara (Kajol) offers a job for Raghuavaran in her company, but Raghuvaran refuses the offer as he is loyal to his boss who recruited him when he was jobless and for his dream of starting his own construction company.
She decides to make him repent feel regret for rejecting her offer. By then he faces problems from Vasundhra in his work place. What happens to Raghuvaran's ambition and his work, to be watched on big screen.
The official shoot of VIP 2 commenced from December 2016. Earlier Dhanush and Soundarya was supposed to work together in romantic, comedy movie titled 'Nilavukku Enmel Ennadi Kobam'.
Saranya, whose character died in the first film, was also selected to portray a role in the film. Hindi film actress, Kajol, was also selected to play a pivotal role in the film, which marks her comeback into Tamil cinema after nearly 20 years.
Sean Roldan was signed to replace Anirudh as the film's composer, while the theme music composed by Anirudh was retained in the new project.
Release
Vip 2 Tamil, Telugu & Hindi audio - Tamil & Telugu trailer will be released on Aug 11, 2017.