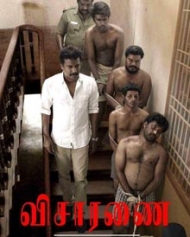 Visaranai (aka) Visaaranai is an experimental Tamil thriller movie written and directed by Vetrimaaran. The film features Attakathi Dinesh, Anandhi and Aadukalam Murugadoss in the leading roles.
Awards
Visaranai receives 63rd National Film Awards for Best Feature Film In Tamil, Best Supporting Actor – Samuthirakani and Best Editing – Kishore Te.
Latest announcement on Visaranai movie says that movie will represent India at the Oscar of 2016.
‪Visaranai Plot:
Visaranai is an adaptation of 'Lock-up', a Tamil novel penned by M Chandrakumar, based on a real life incident.
Four friends, ambling around the streets of Guntur, Andhra Pradesh, are detained by cops in the name of suspicion.
For the next 13 days, horrifying experiences are forced upon them as police officials beat them up mercilessly, forcing them to confess a crime they did not commit.
First Tamil Movie To Feature at Venice Film Festival
Visaaranai is set premier at the 72nd Venice International Film Festival Orizzonti competitive category. In the 72 years history of Venice International Film Festival Visaaranai is the first Tamil feature to enter in a competitive category.
The film has won an award under the prestigious Amnesty International Italy’s Cinema for Human Rights.
Production
Vetrimaaran chose to begin the film in between schedules for his other venture Soodhadi (2015) and signed up actors Attakathi Dinesh and Aadukalam Murugadoss to play convicts in the film.
The film earlier had the working titles of Kutravaali and Lock-Up, during the first schedule in Guindy. The first half of the film was finished completely in September 2014 in locations across Hyderabad.
The director later announced that the film would be an experimental film lasting only sixty minutes. Anandhi joined the cast as heroine in October 2014, being selected after Vetrimaran was impressed with her performance in his production venture, Poriyaalan (2014). Telugu film actor Ajay Ghosh stated that he played the role of an inspector in the film and would appear throughout the first half.