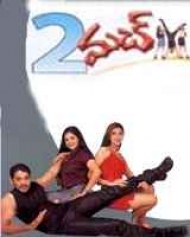 Comedy
Release Date : 22 Nov 2002
Cast : Bala Kumar, Raasi
Director : K Veeru
Synopsis
2 much is a comedy base movie in which, Bullebbai (Bala Kumar) is a brat who is studying the same class for the past 5 years. He likes a girl named Seeta (Chitra Mehta) who joined the class recently.

After futile attempts to woo her, he makes one last attempt. That is to go to Seeta's house and rape her so that she would be forced to marry him later. But in the state of inebriation he rapes Geeta (Raasi), the sister of Seeta.


Rest of the story is about how he realizes his mistake and makes attempts to straighten out the things.