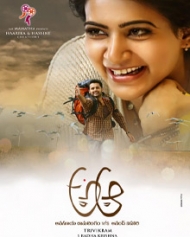 A Aa movie is a romantic comedy film written and directed by Trivikram Srinivas and produced by S. Radha Krishna under Haarika & Haasine Creations banner. In which, Nithin and Samantha are playing the lead roles.
Mickey J Meyer scored music for this movie.
Release
A Aa movie makers are planning to release the movie on June 2, 2016.