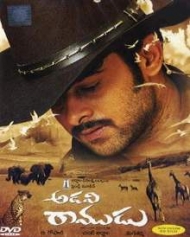 Action Romance
Release Date : 21 May 2004
Cast : Prabhas, Aarti Agarwal
Director : B.Gopal
Synopsis
Adavi Ramudu movie is all about a Jungle boy who came from a village to city for his higher studies and This movie is based on Action Romance , In which Ramaraju (Prabhas) is an orphan who is brought up by Peddayana (Nassar) in Buttayagudem. When he was a kid, the daughter of MP visits his place and they had fun in playing with each other. Before leaving, she asks him to study well. He takes her as inspiration and tops his studies. Later on he joins the same college in which the Madhu (Arti Agarwal) - the girl he met as a kid - is studying. They fall in love. By then, the parents of Madhu fix her marriage up. Ramaraju and Madhu elope. The rest of the story is all about how they trace the couple in the jungle.