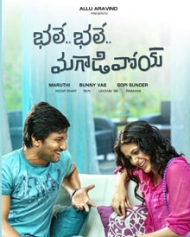 Bhale Bhale Magadivoy is a romantic entertainer movie directed by Maruthi. In which, Nani and Lavanya Tripathi are playing the lead roles.

Bunny Vasu will produce this movie while Gopi Sundar scored music for this movie.

It is about a love story of an unusual guy called Lucky, who suffers from a lapse of memory. Though it sounds quite simple for us, the mess his forgetfulness has caused wasn't that simple.

How did his girl Nandana react to his problem? Did he find a medicine to his bizarre disease? and finally how did he win over his love forms the story.