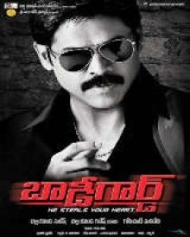 U | Action Romance
Release Date : 14 Jan 2012
Cast : Venkatesh, Trisha Krishnan
Director : Gopichand Malineni
Synopsis
Bodyguard is a romantic action drama based movie which is remake of Malayalam movie Bodyguard. The movie deals with Venkatadri (Venkatesh), who works under a powerful landlord Prakash Raj as a bodyguard. Following a death threat for his daughter Trisha from his rival, Prakash Raj appoints Venkatadri as her personal bodyguard.

He accompanies Trisha and her friend Saloni Aswani to college to protect them from the threat. But his presence at her college makes her irritating and tries to get rid of him by playing pranks with him. She starts making calls from a private number to distract him from his duties telling him that she is in love with him. As expected, after series of events, they fell in love. What happens next should be seen on-screen.