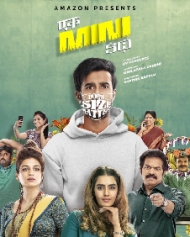 Ek Mini Katha is a romantic comedy entertainer movie story written By Merlapaka Gandhi and directed By Karthik Rapolu. The movie casts Santosh Shoban, Kavya Thappar and Shradda Das are in the lead roles along with Brahmaji, Sudharshan, Sapthagiri, Posani Krishna Murali are seen in supporting roles. The Music composed by Pravin Lakkaraju while cinematography done by Gokul Bharathi and it is edited by Satya G. The film is produced by UV Creations banner.
Story
Civil engineer Santosh (Santosh Shobhan) has been haunted by the problem of his penis being small since childhood. He tries in many ways to solve his problem. In that order he marries Amrita (Kavya Thapar). The psychological fear of whether or not he will come to work for his wife after marriage grows even more. Amidst such issues, will the differences between Amrita and Santosh escalate?
How did the problem of Santosh having a small penis grow in him? What efforts did he make for his solution after that? How did Father Rammohan (Brahmaji) misunderstand Santosh? What are the myths between Santosh and Amrita? What solution did Swamiji (Shraddha Das) show to Santosh? Did Santosh finally have that problem? Are Santosh and Amrita got unite? The answer to these questions is the story of Ek Mini Katha.
Release Date
Ek Mini Katha released on Amazon Prime Videos on May 27, 2021.