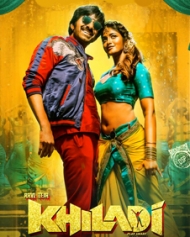 Khiladi​ is an action entertainer movie directed by Ramesh Varma Penmetsa. The movie casts Ravi Teja, Meenakshi Chaudhary, and Dimple Hayathi are playing the main lead roles along with Arjun Sarja, Unni Mukundan, Anasuya Bharadwaj, Nikitin Dheer, Rao Ramesh, Murli Sharma, Mukesh Rishi, Thakur Anoop Singh, Sachin Khedekar, Vennela Kishore, and many others are seen in supporting roles. The music was composed by Devi Sri Prasad while cinematography was done by GK Vishnu, Sujith Vaassudev and it is edited by Amar Reddy Kudumula. The film is produced by Satyanarayana Koneru under A Studios banner.
Story
Gandhi (Ravi Teja) is an international criminal with a strong desire to make money. He was arrested in a Rs 10,000 crore money laundering case and he was sent to jail. Pooja (Meenakshi Chaudhary), who is researching Gandhi's life, meets him in jail. However, he escapes from prison by overthrowing Pooja with the woven story.
But what is the story that Gandhi told to Pooja in jail? What did Gandhi do when he escaped from prison? What is the relationship of Ramakrishna (Unni Mukundan) to Gandhi in Khiladi story? What was the master plan of Gandhi with his wife Chitra (Dimple Haiti), his in-laws Puttaparthi and Chandrakala (Anasuya, Murali Sharma)? What was the plan did by CBI officer Arjun Bhardwaj (Arjun Sarja) to capture Gandhi? How did Gandhi overthrow political leader Guru Singam (Mukesh Rushi) and his son Bala Singam (Niktin Dheer) for Rs 10,000 crore? What are the roles of DIG Jayaram (Sachin Kedkar), Rajasekhar (Rao Ramesh) who claim to be foster fathers in a play played by Gandhi? In the end, Khiladi's story is the answer to all the questions of what Gandhi did with Rs 10,000 crore.
Release Date
Khiladi movie released in theaters on Feb 11th, 2022.