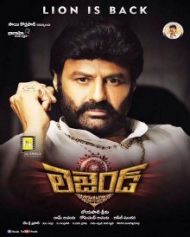 Legend is a action entertainer movie in which, Balakrishna playing a powerfull role as people's hero. Radhika Apte and Sonal Chauhan are playing female lead roles. For  the first time Jagapathi Babu playing the negative role in this movie.

Krishna (Balakrishna) is an NRI, who does not tolerate injustice against anyone. He is in love with Sneha (Sonal Chauhan). The couple comes to India to seek his grandmother's blessings for their wedding.

But Krishna lands in a problem with Jeethendra (Jagapathi Babu), when he heads to save people in trouble in his native. Jeethendra has a rivalry with Krishna's brother Jai Dev (Balakrishna). The fight between the two forms the rest of the story.