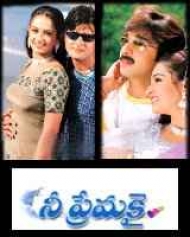 Romance
Release Date : 01 Mar 2002
Cast : Abbas, Vineeth
Director : Muppalaneni Siva
Synopsis
Nee Premakai is a tringular love story in which, Srinivas (Vineeth) and Prabhu (Abbas) are roommates. Srinivas is a sincere guy working in BATA as manager. Prabhu is a parasite, who uses the money and room of Srinivas for his own luxury.

Both these guys have a pious and beautiful neighbor in the form of Anjali (Laya). Srinivas sincerely loves her. Srinivas sends money (Rs 10,000/-) for Anjali as an anonymous well wisher, since her father could not afford MCA education for Anjali.

Prabhu takes the credit by pretending to be that anonymous well wisher. Prabhu exploits Srinivas to the maximum and uses it to attract Anjali. At the same time, Prabhu creates such a situation where Anjali start hating Srinivas.

A relative of Srinivas (Brahmanandam) talks with...