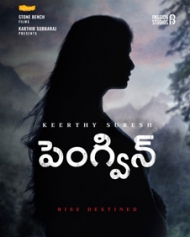 Penguin is a thriller film directed by Eashvar Karthic and produced by Kaarthekeyen Santhanam. The movie cast includes Keerthi Suresh in the lead role. Santhosh Narayanan scored music.
Release
Penguin is all set to have a global OTT release on Amazon Prime Videos, which was earlier set for a theatrical release. The film will exclusively premiere on the platform on 19th, June 2020.