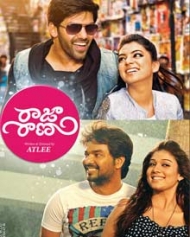 U | Romance
Release Date : 14 Mar 2014
Cast : Arya, Nayantara
Director : Atlee Kumar
Synopsis
Raja Rani is a dubbed version of Tamil movie with same title Raja Rani and it is an Romantic - Comedy movie directed by debutante Atlee Kumar, who previously worked with Shankar as an assistant in Robo (2010).

Movie is Produced by director A. R. Murugadoss in association with Fox Star Studios. The film features Arya, Nayantara, Jai and Nazriya Nazim in the lead roles.

Raja Rani is the story of a newly married couple, Arya & Nayantara who are like Tom and Jerry. Raja Rani is the story of Arya & Nayantara before and after their wedding. The film is about the problems and ego clashes between them. The whole film is about their relationship and relationship with their past. In their past Nayanthara loves Jai & Arya Loves...