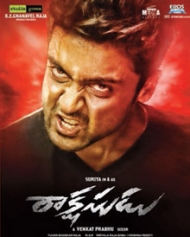 U | Action Thriller
Release Date : 29 May 2015
Cast : Suriya Sivakumar, Nayantara
Director : Venkat Prabhu
Synopsis
Rakshasudu is a dubbed version of Tamil movie Masss and It is a Horror - Comedy movie directed by Venkat Prabhu. In which, Surya and Nayantara and  Pranitha are playing the main lead roles along with Brahmanandam.

It is a story of revenge laced around horror and comedy. Rakshasudu tracks to how and why Suriya gets to see spirits. Did he posses any unique powers? what is the connection between him and that special wraith Suriya meets in the process? What did Suriya do for that special someone forms the story.

Music by Yuvan Shankar Raja and Editing done by Praveen.