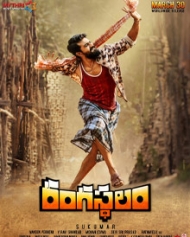 Chitti Babu (Ram Charan), a partially hearing impaired village simpleton leads a happy-go-simple life with his family. He happens to encounter Ramalakshmi (Samantha) and fall for her instantly which gets reciprocated. Things take a serious turn when Kumar Babu (Aadhi), brother of Chitti Babu, returns from Dubai and takes on the President (Jagapathi Babu) of the village.

Why would Kumar take on President? Would he be successful? How will Chitti Babu help his elder brother? All these form the rest of the plot.

Rangasthalam movie is schedule to release on March 30th, 2018.