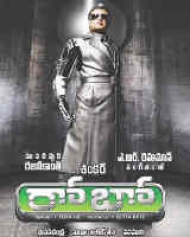 U | Sci - Fi
Release Date : 01 Oct 2010
Cast : Rajinikanth, Aishwarya Rai Bachchan
Director : Shankar
Synopsis
Robo is a science fiction film co-written and directed by S. Shankar and it is dubbed version of tamil movie "Endhiran". In which, Rajinikanth and Aishwarya Rai in the lead roles with A. R. Rahman working on background score and soundtrack. Produced by Kalanidhi Maran.

Rajni plays dual roles. One is a scientist and the other is a Robot. Scientist Rajni creates a Robot with artificial intelligence – like that of sixth sense in humans – to help human beings and to the development of the country.

But its silicon heart falls in love with Aishwarya Rai. Writes romantic poems and the Robot behave just like a human being. Knowing about the extra ordinary intelligence of the Robot the villains try to get control of the Robot.