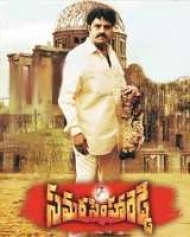 Action Drama
Release Date : 13 Jan 1999
Cast : Balakrishna, Anjala Zaveri
Director : B.Gopal
Synopsis
Samarasimha Reddy is action oreinted movie in which, The movie strats with Sangeetha and her two sisters live with their cruel aunt, who runs a petty hotel. Abbulu joins their hotel as an employee, and later tells Sangeetha that he is their brother, Vasu, who ran away in childhood.

Vasu solves all their problems and romances with Simran. Veera Raghava Reddy is an amputated Rayalaseema don, who is seeking revenge on Samarasimha Reddy. When his sons fail, he sends his daughter Anjali to destroy Samarasimha Reddy.

In the process she reveals that Vasu is actually Samarasimha Reddy, the person who has killed Vasu. To prove his love for Vasu’s sisters, Anjali challenges him to drink poison and Samarasimha lands in a hospital.
Satyanarayana, a Superintendent...