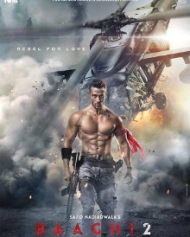 The movie depicts the story of a pro-soldier, who takes on the drug barons & minions to save his former girlfriend daughter forms the plot of Baaghi 2.

Baaghi 2 begins in Goa with a vicious attack on Neha (Disha Patani) by two masked men. Meanwhile somewhere in Kashmir, Ranveer Pratap Singh aka Ronnie (Tiger Shroff), a Special Forces captain is busy exhibiting his love for the nation.

A phone call from Neha who turns out to be his ex and there, you have our boy bidding 'tada' to the valleys and landing straight in Goa. Ronnie is...