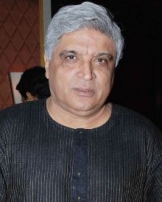 Javed Akhtar is an Urdu and Hindi (Hindustani) poet, lyricist and scriptwriter from India. Some of his most successful works were in the late 1970s and 1980s with Salim Khan as half of the script-writing duo credited as Salim-Javed. Akhtar continues to be prominent in Bollywood and is a sought-after lyricist.

Akhtar was born in Gwalior State (now Gwalior, Madhya Pradesh) to Jan Nisar Akhtar, a Bollywood film songwriter and Urdu poet, and singer Safia Akhtar, a teacher and writer. His lineage can be traced back to seven generations of writers.
The highly respected Urdu poet Majaz was his maternal uncle and the works of his grandfather, Muzter Khairabadi, are looked upon as a milestone in Urdu poetry. Akhtar has one sibling; his younger brother is renowned psychoanalyst Salman Akhtar.

After his birth, his parents moved to Lucknow, Uttar Pradesh, and later to Aligarh. Young Javed Akhtar lost his mother at a tender age and his father frequently moved back and forth between Lucknow and Bombay, so he and his brother spent most of their time with relatives.

At the age of eight, he was admitted to the sixth class in a well-known school of Lucknow, the Colvin Taluqdars' College. From Lucknow he moved to Aligarh to live with his maternal aunt.

He took admission in a well-known school of Aligarh, the Minto Circle. The school is part of the famous Aligarh Muslim University. He completed his matriculation from Aligarh Muslim University. After completing his matriculation, Akhtar entered and began attending Saifiya College in Bhopal where he earned a B.A.. He was a keen debater in college and won the Rotary Club Prize frequently.

Akhtar arrived in Mumbai on October 4, 1964. In his early years of living in Mumbai, he managed to write the dialogue for a minor film for Rs. 100. Occasionally, he used to work as an assistant.

His father Jan Nisar Akhtar was also a famous Urdu poet. Javed's original name was Jadoo, taken from a line in a poem written by his father - "Lamba, lamba kisi jadoo ka fasana hoga". He was given an official name of Javed since it was the closest to the word jadoo.
Javed Akhtar is the father of the film director Farhan Akhtar; the father and son duo have worked together in movies such as Dil Chahta Hai, Lakhshya, Rock On etc. The scripts of these movies were written by Javed Akhtar. Javed Akhtar has not worked with his old associate Salim Khan, the father of Salman, Arbaz, and Sohail Khan since their split up.

Javed used to write his scripts in Urdu, which were then written out in Hindi by his assistant. Another assistant would type out a one-line summary in English. His association with Salim lasted until 1980. After this Javed wrote some scripts on his own but mostly moved into writing lyrics for films, in which he achieved remarkable success.

Javed Akhtar's songs are rhythmic, reflective on life and very melodic and catchy. Javed has also attempted more serious Urdu poetry aside from writing lyrics for movies. A major set of his works were compiled in Tarkash, which was also rendered into audio in his voice. Singers such as Jagjit Singh and the late Nusrat Fateh Ali Khan have sung some of his non-movie poetry.

Javed Akhtar was also a judge alongside Anu Malik, Kailash Kher & Sonali Bendre on India's famous singer hunt Indian Idol 4. He was also on the advisory board of Asian Academy Of Film And Television.

Akhtar was married to Honey Irani, a script-writer for Hindi films, with whom he had two children, Farhan Akhtar and Zoya Akhtar, both film directors.

After Javed's divorce with Irani, he married actress Shabana Azmi, the daughter of another famous Urdu poet, Kaifi Azmi.

In a speech given on February 26, 2005, entitled "Spirituality, Halo or Hoax", Akhtar revealed that he is an atheist. He stated that he does not have any religious beliefs, and denied belief in spirituality of any kind.