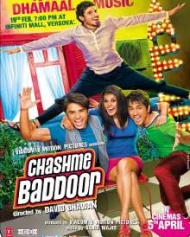 The movie is about three friends Sid, Jai and Omi (Ali Zafar, Siddharth and Divyendu Sharma respectively) who live together in a small house in Goa.

Large on life, wants and everything else, the only thing that seems to keep Omi and Jai going is the women in Goa. Sid, on the other hand, lives a straight and normal life.

The two womanizing slackers, Omi and Jai, now attempt to woo the new girl Neha (Taapsee Pannu) in the neighborhood. A series of lies, secrets and comical situations is what follows, making the flick a thoroughly enjoyable family outing!