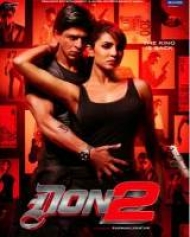 Action Thriller
Release Date : 23 Dec 2011
Cast : Shahrukh Khan, Priyanka Chopra
Director : Farhan Akhtar
Synopsis
Don 2 is the sequel to the 2006 film, Don: The Chase Begins Again. This time around, wilier and even more ruthless than before, Don (Shahrukh Khan) is ready for bigger game. A master plan that will destroy all his enemies and virtually bring Europe to its knees!

Having conquered the Asian underworld, Don (Khan) now has his sights set on European domination. In his way are the bosses of the existing European underworld and all law enforcement agencies.

The action shifts from Kuala Lumpur to Berlin as Don must avoid assassination or arrest, whichever comes first, in order for his plan to succeed.