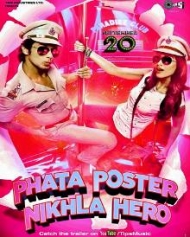 The film follows the story of Vishwas Rao, an aspiring actor mistaken as a super cop.  This triggers into many more instances that will bring you package of action and comedy.

Characters
Shahid plays the role of Vishwas Rao, an aspiring actor. He is high on action and comedy in this movie. As he acts as a fake cop, he also finds him tough situations because he can't afford any scars as he wants to be an actor.

Ileana plays the role of a Kajol, a social worker. She is often referred to as 'complaint Kajol' because she often visits the police...