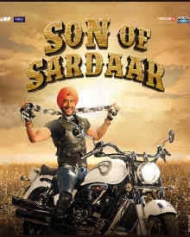 U/A | Action Comedy
Release Date : 13 Nov 2012
Cast : Ajay Devgn, Sonakshi Sinha
Director : Ashwani Dheer
Synopsis
Son of Sardaar movie is a remake of a Telugu movie Maryada Ramanna which in itself is a remake of the 1923 American silent movie Our Hospitality.

The story is based on the character Rajveer Singh played by Ajay Devgan who returns to his parents' village where he meets Jiya played by Sonakshi Sinha and fall in love with her.

Rajveer approaches a feudal lord (Sanjay Dutt) for selling his own 5-acre property but due to certain circumstances Rajveer gets trapped in his house, since they come to know that he is the son of the man who killed the feudal lord's brother.

The rest of the story is all about how Rajveer escapes from his death trap.