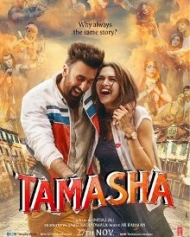 Tamasha movie (earlier titled Window Seat) tells the story of an individual who loses his self by living according to the social conventions expected of him.

The character played by Ranbir and Deepika is one of the reasons for the film's title Tamasha as it refers to the Shakespearean monologue, 'All the world's a stage and all the men and women merely players'.

Character:
Ranbir Kapoor's character is about a person who is enchanted by stories, who grows up hearing them and expresses himself by performing them. Kapoor plays a free spirited person who wants everybody around him to be happy. He is a nomad, going out of his way to please people. The film portrays Kapoor's life in three stages–as a nine-year-old child, a 19-year-old adolescent and a...