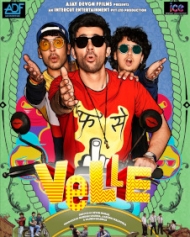 Velle is a Bollywood drama, helmed by Deven Munjal. The movie stars Abhay Deol and Karan Deol in the lead roles. Velle all sets to hit the big screens on December 10. The movie has its music composed by Yug Bhusal, Rochak Kohli and Sohail Sen. Anshul Chobey has wielded the camera for Velle. The movie depicts the story of an aspiring director, who manage to reach out a popular actress for his low budget film. Deven Munjal has previously worked on films like Main Hoon Na and Om Shanti Om in different capacities.

Velle follows a group of four school students ready to explore the world. When one of them is short of financial support to escape the life of mystery the group stages a kidnapping. However, things get real pretty quick when danger comes along and Riya is kidnapped by real bad guys.