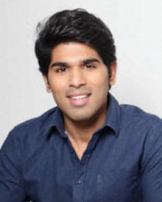 Allu Sirish is an Indian film actor who works predominantly in the Telugu film industry. Sirish made his acting debut with Radha Mohan's social drama Gouravam, which was a bi-lingual film shot in Telugu and Tamil. In 2014, his second film Kotta Janta was released and got good fame to him and his third movie Srirastu Subhamastu movie brought him a much needed brake in the industry.

Allu Sirish was born in Chennai on 16 January 1987. His father Allu Aravind is a film producer and he is a younger brother of Allu Arjun.