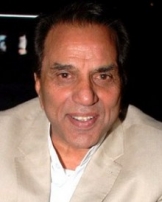 Dharmendra is an Indian film actor, producer and politician. In 1997, he received the Filmfare Lifetime Achievement Award for his contribution to Hindi cinema.

He was born in Phagwara, Punjab to a Jat (Sikh) father Kewal Kishen Singh Deol and Sikh mother Satwant Kaur. At the peak of his film career he was considered the most handsome actor in Bollywood and a matinée idol. He is considered as one of the biggest Bollywood superstars.

He was a member of the 14th Lok Sabha of India. He represents the Bikaner constituency of Rajasthan and is a member of the Bharatiya Janata Party (BJP) political party. He was recently awarded the Lifetime achievement award for his contribution to Hindi cinema.

He rose to fame as a Punjabi actor who appeared in more than 200 Hindi films since the early 1960s. He married Prakash Kaur and later actress Hema Malini. He is the father of actors Sunny Deol and Bobby Deol. He also has two married daughters Vijeta and Ajeeta known as Dolly and Nonu who have been successfully kept away from the Bollywood industry by Prakash Kaur Deol.

He is also the father of actress Esha Deol and Ahana Deol from Hema Malini. His brother Ajit Singh Deol is a former director and did a cameo of a truck driver in the film Pratigya. He is the uncle of actor Abhay Deol, who is the son of his younger brother Ajit Deol. His father was Kewal Kishen Singh Deol, a school headmaster in Punjab.

Dharmendra is the only actor to have starred with almost all the Kapoor members, except Kareena Kapoor and Prithviraj Kapoor.

Dharmendra has starred in a large number of hit films in Bollywood and is considered a living legend. The "HE-MAN" as he is often called as, has given blockbusters consistently from 1962 till 1995 as a lead hero alone. He was first noticed in a Filmfare spot-the-talent contest and came to Mumbai to become an actor. He was signed by Arjun Hingorani for the film Dil Bhi Tera, Hum Bhi Tere (1960).

Dharmendra even though acted with many heroines, his pairing with the following made larger impact - Sharmila, Asha Parekh, Zeenat Aman, Parveen Babi and Hema Malini.

His most successful pairing was with Hema Malini with whom he has acted in as many as 27 movies of which 20 are more popular. Most of these movies were hits which in turn propelled producers to cast them in romantic films in the 70s.

As action movies became more popular, he took on action hero roles throughout the 1970s. Perhaps, the most memorable of these was his role in the 1975 blockbuster film Sholay, where he was teamed with Amitabh Bachchan. Throughout the 1980s and 1990s he continued to appear in many more films playing leading roles or supporting roles.

Apart from Amitabh Bachchan and Akshay Kumar, no other actor in Hindi cinema can claim to be equally good in comedy and action. He regards Pran, Dilip Kumar and Sanjeev Kumar as better actors and always prayed for success of the movies of Shashi Kapoor and Devanand and has immense respect for Rajesh Khanna and Jitendra. He considers Amitabh as a younger brother.

Dharmendra also has the distinction of being the actor with the most number of hits in Bollywood. He has acted in over 60 films which have gone on to become golden jubilee hits. In addition, he also has acted with the directors who varied with different styles in their film-making. Below given is a list of noted directors under categories with whom he has worked.

He also has the distinction of appearing in quite a few films opposite leading ladies who starred opposite his son Sunny Deol. Notable amongst those are Sridevi (Naaka Bandi), Jaya Prada (Elaan-E-Jung), Dimple Kapadia (Shehzaade), Amrita Singh (Sachai Ki Taaqat), Kimi Katkar (Humlaa) and Poonam Dhillon (Sone Pe Suhaaga). No other father-son duo would have worked with so many leading ladies in the Indian film industry.

At the peak of his career, he was voted amongst the seven most handsome men in the world. He was also known for his exercising, which gave him a physique his contemporaries could only dream of. In fact, after Phool Aur Paththar was declared a hit, he established himself as the 'He-Man' of the Hindi film industry.

He is considered as an inspiration to the macho men of today, Salman Khan and Akshay Kumar. In one of her recent interviews, Priety Zinta has been quoted as saying that he is her favourite actor. She has gone on to recommend him to play her father's role in Har Pall (2008).

He has also experimented with film production; he launched both of his sons in films: Sunny Deol in Betaab (1983) and Bobby Deol in Barsaat (1995) as well as his nephew Abhay Deol in Socha Na Tha (2005).

After a few years of hiatus from acting since the early 2000s and also seeing Amitabh Bachchan's sucess in the industry, he started reappearing in films as a character actor. His 2007 films Metro and Apne were both successful at the box office. In the latter, he appears with both his sons, Sunny and Bobby for the first time. His other release was Johnny Gaddaar, where he played a villainous role.

Dharmendra married twice and has maintained both his wives. His first marriage was to Prakash Kaur at the age of 19 in 1954. His second marriage was to the Bollywood actress Hema Malini. They are said to have fallen in love on the sets of Sholay (1975) although they have made many films together before and after Sholay.

From his first marriage he has two daughters who are settled in California and two sons who are also successful actors: Sunny Deol and Bobby Deol. From his second wife Hema Malini whom he married on 2 May 1980, he has two daughters: Esha Deol, who is an actress, and Ahana Deol. His nephew Abhay Deol is also an actor.

Dharmendra has gone on record saying he did not believe the Mumbai film industry was a place suitable for girls. He was unperturbed by his sons Sunny and Bobby joining the industry, and he was vocal about his displeasure regarding his daughter Esha's choice of profession.

He also became active in politics. He was elected as a Member of Parliament in the 2004 general elections, from Bikaner in Rajasthan, on a Bharatiya Janata Party ticket. During his election campaign, he made an ironic remark that he should be elected Dictator Perpetuus to teach "basic etiquette that democracy requires" for which he was severely criticized.