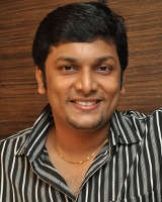 Harish Raghavendra is an Indian Tamil playback singer. He is best known for his songs like Sakkarai Nilave from Youth, Melliname Melliname from Shahjahan, Alage Theeya (Minnale), which became a massive hit and Anbe Enn Anbe from Dhaam Dhoom.

He has also acted in certain movies from the Tamil Cinema Industry. He played the main role in the movie Vikadan (2003) with Arunpandiyan. Actually his main passion during that time was singing; but the director of the movie urged Harish to give a try, so there he finally appeared as the hero with Gayathri Raguram.

He has also played a brother's role in the well known Thirupathi, which was written and directed by Perarasu and the main actors are Ultimate Star Ajith Kumar and Sadha. He has sung more than 150 songs from many different languages like Tamil, Telugu, Kannada, Malayalam & Hindi and most of them have become famous.

He has also been winning many awards. Nirpathuven from 'Barathi' was a big break for him and he even got Tamil Nadu state award for the same. His first trial for Tamil song was 'Vaa Saghi' from a 1997 Tamil movie entitled Arasiyal. He was only 18 and it was his first year of college. He also has a qualification in Software Engineering and actually he was the first one from his family to crossover to films.

He has also pursued 'Yoga' course recently. He has also marketed an album with music director Devan, which didn't really manage to pick-up, although it got a good response mainly from his fans. He is slightly different from other well-renowned singers like Unni Krishnan because Harish didn't really have a background in classical music when he became a singer but later on he managed to learn the basics, which managed to stabilize him in the singing industries. He also has judged many reality shows together with other famous singers.