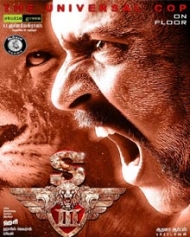 Singam 3 (Si 3) is a Tamil action movie written and directed by Hari. A sequel to the 2010 film Singam, Singam 2.  The film stars Suriya who reprises the title of the movie, the movie cast includes Anushka Shetty and Shruti Haasan in the lead roles.
The first look posters of the movie revealed on Jan 7th, 2016 and the movie shoot starts on the same day at Vaizag. The first look posters carries a tagline called - The Universal Cop.
Story
Singam 3's plot begins with Durai Singam handling the investigation of a senior cop murder case. In the due course, Durai Singam unearths some shocking truths and he goes global for a mission, to grab the villain. The action shifts between the Andhra, Australia and Tamil Nadu. What happens later has been narrated in Singam 3 in a racy pattern.
View: Interesting photos from Singam 3
Harrish - Hari Combo After 12 Years
Harrish Jayaraj joins hands with Hari after 12 years for this movie, he composes music for this movie. In initial days of Hari, Harrish Jayaraj used to compose music for his movies like  Saamy, Arul and Kovil.
Release
The audio of the movie was released on 27 November 2016. The movie went through several changes of release date, and scheduled on 26 January 2017, but Singam 3 again postponed due to tense situation in state on Jallikattu demonstrations and new release date is Feb 9.