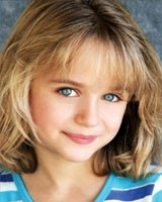 Joey has appeared in the television shows "CSI", "Medium", "The Suite Life of Zack and Cody", "Entourage", "Jericho", and "Avenging Angel" to name a few.

Interviewed by the Hollywood Reporter by Patrick Hipes, Joey was listed as "The Next Generation Talent", listed along kid favorites Corbin Bleu and Selena Gomez.

Her first film. "Grace" was from the Emmy award winning, Camille Cellucci. Since then Joey has worked with Adam Sandler on "Reign Over Me", and says she loved working with the Dwoddle brothers on the feature "Quarantine", she also completed three pilots, lent her voice to the 2008 release of "Horton Hears A Who". The next animated movie that will feature Joey's voice will be "Ice Age 3" due for release in 2009.

Joey has performed in over ten theater productions, and loves the feel of a live audience. She has also performed in live "improv" theater and thinks the greatest thing is to make an audience laugh.