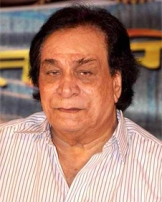 Kader Khan was an Indian film actor, comedian, and script and dialogue writer. Kader Khan is an ethnic Pashtun. He is originally from Pishin, which is in the Balochistan province of Pakistan and from the Kakar tribe. Kakar tribe is one of the famous tribes of Pashtuns residing in Balochistan. Kader Khan was originally a lecturer in an engineering college in Mumbai. On the annual day function of the college, Kader Khan took part in a play. Dilip Kmar, present at the event, was so impressed by his acting that he signed him for his next film.

He has acted in over 300 films in the Hindi & Urdu languages, and has written dialogues for over 1,000 Indian films, from the 1970s up to the turn of the 21st century. He is most popularly recognized for working with comedian actor Govinda in comedic films by director David Dhawan.

He has also worked side by side with other comedic legends like Shakti Kapoor and Johnny Lever in over 300 films. He played a large variety of parts in films like a supporting role of a father, uncle, brother, relative, the main villain or the side villain, guest actor and comedian.

Khan is said to be as responsible for Amitabh Bachchan's success as equally as writer duo Salim-Javed. He wrote many memorable dialogues for Amitabh's films, including Mr. Natwarlal, Amar Akbar Anthony, Agneepath, Muqaddar Ka Sikander, Laawaris and Naseeb, which were huge hits at the box office.

He appeared in films like Mujhse Shaadi Karogi (2004), Lucky (2006) and Family: Ties of Blood (2006). He had also starred in his own comedy television series titled Hasna Mat, which aired on Star Plus.

He lives in Mumbai, the home of the Indian film industry. His son Sarfaraz Khan has also acted in some films.

He passed away at the age of 81 due to prolonged illness.