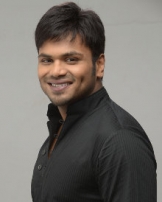 Manchu Manoj Kumar is an Indian Telugu actor. He is the son of Mohan Babu and the younger brother of actor Vishnu Vardhan Babu. He first appeared at the age of ten as a child artist in Major Chandrakanth. He holds CinemAAA Award and Nandi Award for his performance in Donga Dongadi and Bindaas.

Manoj has been known to Telugu audiences since his childhood. He played many roles as a child actor in his own banner movies, as his father Mohan Babu is shown as a kid in the flashback. He received a lot of praise for his performance in Mohan Babu's film Punya Bhoomi Naa Deshm.

He produced many movies under the banner of Lakshmi Prasanna Pictures. He has an elder sister, Lakshmi Manchu, and an elder brother, Vishnu Manchu, who is also an upcoming actor in Tollywood.

He started his career as a hero in 2004 with a movie called Donga Dongadi, which was remade from a Tamil movie called Thiruda Thirudi. That was an average grosser at the box office.

He didn't have any hits after that. Raju Bhai in 2007 turned out to be a below-average film, even though the movie's plot and narration were good.His flick Nenu Meeku Telusa revolves around a recurring amnesiac. It was woven on the basis of an English movie called Clean Slate.