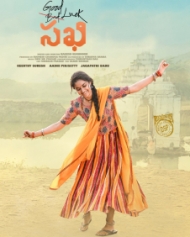 Good Luck Sakhi is a sports backdrop movie directed by Nagesh Kukunoor. The movie casts Keerthy Suresh, Aadhi Pinisetty and Jagapathi Babu are in the main lead roles. The music was scored by Devi Sri Prasad while cinematography is done by Chiranthan Das and is edited by Sreekar Prasad. The film is produced by Sudheer Chandra Padiri.

Colonel (Jagapati Babu), retired from the military, arrives at his village with a lofty goal. He is determined to make a good shooter from the countryside to enhance the country's prestige in sports. Goli Raju (Adi Pinishetti) introduces to the Colonel a friend (Keerthi Suresh) who is good at aiming at such situations. Sakhi, who is not proficient in shooting, makes her the top shooter in the country.

What kind of problems did Colonel face while making Sakhi a shooter. How did Sakhi deal with the moves and problems of her rivals? What were the circumstances of the comrade who was attracted to the Colonel? Were the emotional issues between the Colonel and Sakhi impressive? What are the roles of Goli Raju and Soori (Rahul Ramakrishna) in this film? Good Luck Sakhi is the answer to the question of how an ordinary young woman became the top shooter in the country.