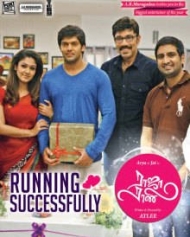 Raja Rani is an tamil Romantic - Comedy movie directed by debutante Atlee Kumar, who previously worked with Shankar as an assistant in Enthiran (2010) and produced by A. R. Murugadoss in association with Fox Star Studios. The film features Arya, Nayantara and Jai in the lead roles.