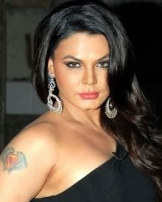 Rakhi Sawant is an Indian dancer and Hindi film and television actress, and a television talk show host. She comes from a Maharashtrian Hindu family.

The daughter of a senior Mumbai policeman who grew up in Mumbai, and was an arts student at Mithibai College, in Vile Parle, Mumbai, she appeared in several music videos and in some item songs in Bollywood movies.

Rakhi shot to fame when she was still in school, when Bollywood director Suneel Darshan cast her in an item number opposite Govinda in Joru Ka Ghulam. Three years later, she auditioned four times before winning her breakthrough item number Mohabbat hai Mirchi in Chura Liya Hai Tumne in 2003. Rakhi had a boyfriend, Abishek.

On November 12, 2008, she confessed to breaking up with her boyfriend Abhishek on Zoom TV. Though Rakhi had regularly broken up and reconciled with Abhishek before, this was final.

Rakhi has also had several controversial times; her father who dislikes the film industry was dismayed when his baby daughter entered a profession that he considered disrespectful. Her father now lives alone and Rakhi is the sole provider for the Sawant family, including her brother Rakesh, who is in the process of directing his first film.

She got a lot of media attention from the Mika Singh 'pappi' incident. After she received wider recognition as a contestant in several reality shows, including Big Boss and Nach Baliye, she began to receive considerable coverage from the Indian tabloid press.

In November 2008, Rakhi appointed senior journalist, Internet branding and marketing expert and publicist Flynn Remedios to handle her media and branding needs as she began to get media attention from not just the Indian press but from the media all over the world.

Rakhi has also performed in the Indian Cricket League 2nd Final on November 15, 2008. About 70,000 people were present at that time on the ground.