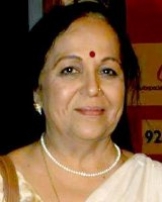 Rohini Hattangadi is an Indian film, Marathi theatre and television actress. She has won two Filmfare Awards, one National Film Award, and is mostly known for being the only Indian actress to win the BAFTA Award for Best Actress in a Supporting Role for her performance as Kasturba Gandhi in the film Gandhi (1982). She is also noted for her roles in Mahesh Bhatt's two art films, Arth (1982) and Saaransh (1984).

Hattangadi was born in New Delhi; she did her schooling from Renuka Swaroop Memorial Girls High School, Pune in 1966. She joined National School of Drama (NSD), New Delhi in 1971; it was here that she met Jayadev Hattangadi, who was also in the same batch as hers. Together, they received training under theatre guru Ebrahim Alkazi.

Upon graduation in 1974, Rohini was awarded the Best Actress award and also an award for Best All-round Student, while Jayadev who was training in direction, won the Best Director award. Jayadev and Rohini married the following year.

Rohini and Jayadev have a son Aseem Hattangadi, who is also a theatre actor and acted in Badal Sircar’s play, 'Evam Indrajit', directed by Jayadev Hattangadi himself. Jaydev Hattangadi died on December 4, 2008. He had been suffering from cancer for the past one year and was only 60 years old.

Rohini started her career with Marathi stage. Once in Bombay from NSD, Jayadev and Rohini started a Marathi theatre group in Bombay, called ‘Awishkar’, which went on to produce over 150 plays.

In 1975, she won the ‘Best Actress Award' at the Maharashtra State Drama Festival, for her performance in ‘Changuna’ a Marathi adaptation of Federico García Lorca’s Spanish classic ‘Yerma’, produced by ‘Awishkar’, in Mumbai. Since then there has been no looking back for her.

But the play that stands out in her long and illustrious career is 'Aparajita', based on a Bengali story by Nitin Sen; this 120 minute long, solo-act play, valiantly displays her range and ability to transit from one emotional high to another, while retaining the centre of all the character, she played on the stage, over 18 of them.

First staged in 1999, the play has over the years, been performed both in Hindi and Marathi. Incidentally, it was the first performance of hers, in a long time to be directed by her husband, noted theatre director Jayadev Hattangadi; in all she has performed in five plays directed by him including Medea, a Greek tragedy written by Euripides.

Over the years she has played several memorable characters on the stage, like Vimla Pandey of 'Mahayagya' to a Hindustani classical singer in 'Yeh Kahaan Aa Gaye Hum,' from a committed social worker in 'Intehaan' to the unlettered and harassed Sakkubai in 'Hindustani' ; Hattangadi has the capability to transcend herself and melt herself into the characters she plays on stage, ever so eloquently.

She won the 2004 Sangeet Natak Akademi Award for her contribution to Indian theatre.

Her work was also widely appreciated in Vijay Tendulkar’s ‘Mitra Chi Gosht’ directed by Vinay Apte, 'Hori’ based on Premchand’s ‘Godaan’, produced by IPTA, and most recently in Hindi play, ‘Kohra’, with Sudha Chandran and Babul Bhavsar.

Jayadev and Rohini Hattangadi also were involved in the functioning of ‘Kalashray’, a centre for research and education in arts and talent encouragement in Mumbai, working with the underprivileged and developing tools for powerful communication.

Over the years, she has been seen in a number of TV serials including Mahayagya, Thoda hai thoda ki Zaroorat hai, Teacher, etc.

Rohini Hattangadi made her film debut with Saeed Akhtar Mirza's Arvind Desai Ki Ajeeb Dastaan in 1978; the film won the National Film Award for Best film. This was followed by his next, Albert Pinto Ko Gussa Kyon Ata Hai (1980) and Chakra (1981) by Rabindra Dharmaraj, starring Naseeruddin Shah and Smita Patil in lead roles.

Her next big break was an international film Gandhi (1982), which got her instant international recognition, and BAFTA Award for Best Actress in a supporting role in 1982, the only Asian to get that so far.

This was followed by two films in which was shown as an ageing housewife, Mohan Joshi Hazir Ho! and Saaransh with Anupam Kher, both released in 1984. By this time, she was heavily type-cast by the commercial Hindi cinema in motherly roles; ironically she played her first motherly role as Kasturba Gandhi in Gandhi (1982), when she was only 27 years old; perhaps its critical acclaim went against her in the field of commercial Hindi cinema.

Nevertheless, she did break the mould in the commercial field of cinema with a powerful yet small role in N. Chandra's Pratighaat (1987), not to mention her excellent comic performances in Pankaj Parashar's Chaalbaaz and Ladaai, both released in 1989. She also played the role of Sribaby, a drug kingpin, in Pankaj Parashar's Beverly Hills Cop-inspired movie Jalwa (1987).

The Indian art cinema, however, managed to offer her a wide variety of film roles befitting her calibre, and it was here that she found her due as a powerful actress that she is. In 1985, she worked with Govind Nihalani in Aghaat (1985), with Muzaffar Ali in Anjuman (1986) and with Girish Kasaravalli in Mane and Ek Ghar, both 1991 releases.

In 1989, Bollywood commercial cinema once again cast her as an ageing mother in the Amitabh Bachchan starrer, Agneepath, where yet again she proved her mettle of delivering power-packed performances and yet again she was awarded with the Filmfare Best Supporting Actress Award in 1991.

Her next performance in the Sanjay Dutt hit Munnabhai MBBS (2003) was widely appreciated, and she also acted in the Tamil version, Vasool Raja MBBS in the same role as the mother of the protagonist.

Over the years, she has acted in over 70 films in all, and in each she has portrayed her characters as powerfully as she does in her theatre performances.