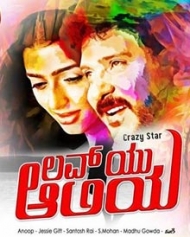 Ravichandran plays a gynecologist for the first time in his career and Bhoomika playing a dance troupe teacher. The story is about how the over involvement in an occupation takes a heavy toll on family life.

Love U Alia is all set to release on 17 September 2015 in three languages. Kannada, Telugu and Hindi.