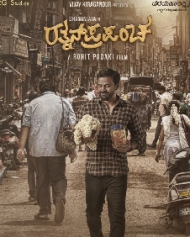 Rathnan Prapancha is a romantic movie directed by Rohit Padaki. The movie casts Dhananjay are in the main lead role. The Music composed by B Ajaneesh Loknath while cinematography done by Shreesha Kuduvalli and it is edited by Deepu S Kumar. The film is produced by Karthik Gowda and Yogi G Raj under KRG Studios banner.

Rathnakara (Dhananjay) is a middle-class employee living with his mother in Bengaluru. He was frustrated with the childish behaviour of his mother Saroja (Umashree). One fine day, he meets Mayuri (Reba Monica John), an aspiring research journalist at a newspaper office. Mayuri calls Rathanakar and tells him about the truth of his birth. What happens to Rathnakar life then, and How Tabassum, Udaal Babu Rao and Yellavva are connected to Rathnakara's life, forms the rest of the crux of the story.