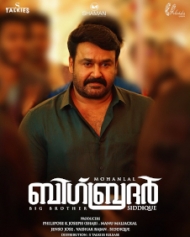 Big Brother is a Malayalam action-drama, which has been directed by Siddique. The movie stars Mohanlal and Arbaaz Khan in the lead roles. From the trailer its is clear that Mohanlal starrer majorly revolves around the drug dealings, a narcotics officer who is appointed to wipe off the drug mafia, and the central character Sachidanan, who has a dark past.

Sachidanandan (Mohanlal) has been serving double life imprisonment for the murders of the man who constantly troubled his stepmother and a police officer who harassed his friends in jail. He is finally released from the jail after long 24 years, thanks to the constant efforts of his younger brother Manu (Sarjano Khalid). However, life in jail has completely changed Sachidanandan who now wants to live peacefully with his family, and he finds it difficult to lead a normal life. Following some unexpected turns of events, Manu is kidnapped and Sachidanandan is forced to return to his old life to save his brother. What happens next forms the crux of the story.