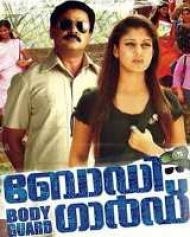 U | Action Thriller
Release Date : 23 Jan 2010
Cast : Dileep, Nayantara
Director : Siddique
Synopsis
Bodyguard movie tells the story of Jayakrishnan (Dileep) who is an young guy with a very strange habits. From his childhood, he is attracted to anyone who shows a miniscule heroism.

But later in real life, he found that crooks were more adventurous and heroic than cops and so started admiring, following and living like them.

As part of his new job, Jayakrishnan is also forced to take care of Ammu (Nayantara) , Ashokan's (Thyagarajan) daughter. So he moves along Ammu even when she is into her college, as her bodyguard. What rollicking fun follows forms the rest of the plot.