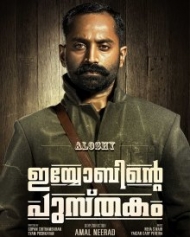 Iyobinte Pusthakam is a Period thriller flick from Amal Neerad, and is set in the period spanning from 1914-46. In Iyobinte Pustakam Fahadh Faasil, Lal and Jayasurya plays the lead role.

Movie show case the story of an ordinary man who faces a lot of family problems as well as problems in life but tries to hide and overcome but failed miserably. In Iyobinte Pusthakam Lal plays the title role.

Movie is jointly produced by Fahadh Faasil and Amal Neerad and is distributed by A&A Release. Script work of the movie is handled by Gopan Chithambaran & Syam Pushkaran, Music is by Neha Nair & Yakzan Gary Pereira.

Iyobinte Pusthakam set to release on first week of November.