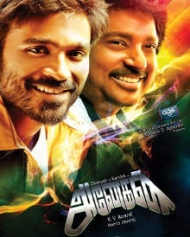 Anegan is an Tamil romantic movie direction by K V Anand under the banner AGS Entertaintment. The movie starring with Dhanush, Amyra Dastur who debuted in Bollywood with Issaq and Karthil Muthuraman in lead roles.

Director says about his title "Anegan" "It's a pucca Tamil word, which features in Thiruvasagam — Egan, anegan, iraivanadi vazhga. It means the different forms God takes. When roughly translated, it means 'multiple single person'. But, the film's got nothing to do with bipolar disorder!" This is the first time that he's attempting a romantic entertainer. The movie kick start from 2nd September 2013 in Puthucherry.