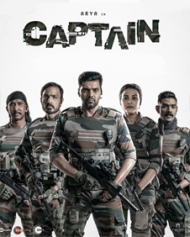 Captain is a Tamil action sci-fi movie written and directed by Shakti Soundar Rajan and produced by Arya under the banner 'The Show People'. The movie star cast includes Arya and Aishwarya Lekshmi in the lead roles, while Simran, Harish Uthaman, Gokul and Kavya Shetty play supporting roles. The music for the movie is composed by D Imman and the cinematography is handled by S. Yuva.
This movie tells the story of a military officer tasked with fighting aliens.