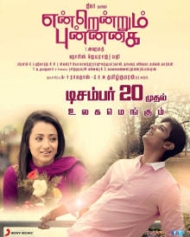 Endrendrum Punnagai is an Tamil romantic comedy movie to be directed by I. Mueenuddin Ahmed starring Jiiva and Trisha. The movie has music by Harris Jayaraj and cinematography by R. Madhi. Click here to get full Cast & Crew

Endrendrum Punnagai is the story of three friends Gautham (Jiiva), Sree (Vinay) and Baby (Santhanam). The thick bond formed between the three friends is portrayed in a fun filled manner at the start of the movie, right from the childhood portions.

The incidents taking place in Gautham ’s life and the way it affects their friendship and family relations form the crux, What happens in Guatham 's life is rest of the story watch it in big screen.

A single track from the album titled "Vaan Engum Nee Minna" was released on the 18th of October ,becoming an instant hit and receiving positive reviews from critics and audience. The album is scheduled to be released by Kamal Hassan on 24th of October 2013.