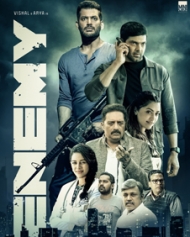 Enemy is a Tamil action thriller movie written and directed by Anand Shankar and produced by Vinod Kumar under the banner of Mini Studios. The movie star cast includes Vishal, Arya, Mirnalini Ravi, Mamta Mohandas, and Prakash Raj in the lead roles. The movie score was composed by Sam C. S. and the songs were composed by S. Thaman. The movie cinematography by R D Rajeshakar and edited by Raymond Derrick Crasta. The movie Enemy theatrically released on 4 November 2021. The film released simultaneously in Tamil and Telugu languages.
Story
Foe follows the narrative of two cherished companions, who turn enemies because of one's inner self and envy. Chozhan (Vishal) and Rajiv (Arya), in their initial youngsters, are prepared by Rajiv's dad, an ex-CBI official (Prakash Raj) to make them join the Police. Both Chozan and Rajiv are similarly prepared by Rajiv's dad. Chozan seems, by all accounts, to be better out of the two causing disdain and envy among Rajiv.
A long time later, Chozhan turns into a departmental storekeeper in Singapore, additionally, he fosters an affection interest with Akshaya. A gas organization abruptly blasts which killing 11 Tamilians and seriously harming more, this occurrence drives Chozan to tackle different issues which encompass him.