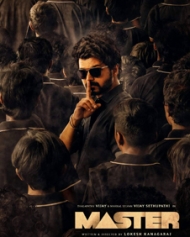 Master is a Tamil action-thriller movie, written and directed by Lokesh Kanagaraj of Kaithi fame, and produced by Xavier Britto, under the banner XB Film Creators. The movie stars Vijay and Vijay Sethupathi in the leading roles while Malavika Mohanan, Arjun Das, Andrea Jeremiah and Shanthanu Bhagyaraj play supporting roles. The music for the movie is composed by Anirudh Ravichander, whilst cinematography and editing are handled by Sathyan Sooryan and Philomin Raj, respectively. Director Lokesh and co-writer Rathna Kumar made cameo appearances in a section of the film.
Story
The plot revolves around Bhavani, a dreadful gangster making a juvenile correction facility his centre for all illegal activities. His own rough childhood makes him a sadistic criminal who uses the young boys at the juvenile facility to achieve his misdeeds. However, Master enters the scene to foil his plans. A free-spirited but carefree schoolteacher, Master gears up to lock horns with Bhavani after a tragic incident. What follows is a pumped up showdown between the two.
Release
The first look poster of the movie was released on 31 December 2019, coinciding with New Year's Eve. The second look poster was released on Thai Pongal Day, 15 January 2020. The third look poster was released on 26 January 2020 coinciding with India's Republic Day, featuring both actors Vijay and Vijay Sethupathi staring each other in an intense look.
The satellite rights of the movie was sold to Sun TV Network and the digital rights of the movie was sold to Amazon Prime Video. Master teaser released on Diwali on SunTV 's Youtube channel. The movie is distributed by Lalit Kumar under Seven Screen Studios. Master was initially scheduled to release theatrically on 2020 Summer (9 April), but it was delayed due to the COVID-19 pandemic and scheduled to release on Jan, 13 2021 (eve of Pongal).
Amazon Prime Video Announces the digital Premiere of action thriller movie Master for 29th of January