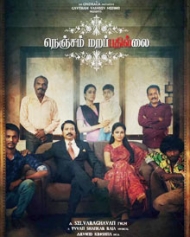 Nenjam Marappathillai is a Tamil horror movie direction by Selvaraghavan and produced by Gautham Vasudevamenon. The movie has S J Suriya, Nandhita and Regina in the lead roles. Yuvan Shankar Raja composes music for this movie. The movie is been produced by Gautham Menon for Ondraga Entertainment and P. Madan for Escape Artists Motion Pictures  and cinematography by Arvind Krishna.
The project was officially launched on 28 January 2016 in Chennai, with Nandita Swetha added to the cast. Music Composer Santhosh Narayanan Replaced by Yuvan Shankar Raja during April 2016 thus collaborating after a long time with Selvaraghavan.
Release
After long delay Nenjam Marappathillai scheduled to release on March 05, 2021.