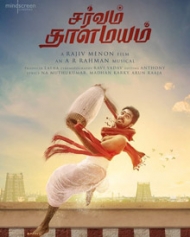 Sarvam Thaala Mayam is the movie title of music composer and performing artist GV Prakash Kumar with cinematographer/director Rajiv Menon. The movie in light of a percussion (musical instruments) player. AR Rahman compose music for this movie. This is the third time that A R Rahman and Rajeev Menon works together. Their first two films, Minsara Kanavu (1997) and Kandukodein Kandukondein (2000) got critical acclaim.
Story In Detail
Peter’s parents, much similar to any lower middle class family, wants their son to earn a good living through focused education and not via the passion. But a determined Peter is hell bent of becoming a musician after being inspired from Vembu Iyer (Nedumuni Venu). Though he faces a lot of hurdles, pain and humiliation, Peter approaches Vembu and the latter trains the former without being caste-driven.
Peter forgoes his non-veg and alcohol habits to master the art and in sometime, scales to greater heights. Situation forces him to move away from Vembu Iyer and embark on the journey of round trip across regions for music shows. It’s in the second half where it is shown that no matter the achievements you carry and the talent you possess, the oppression by higher caste on lower caste still exists and doesn’t seem to be a possibility to be curtailed.
How does the movie wind up with the open thread in the second half? Carrying such a strong message, will the director convey a formidable climax through the protagonist?
Check out the tracklist of 'Saravam Thaala Mayam'
The movie title was announced on Nov 16, 2016. The tracklist of the movie was launched on mid of November by AR Rahman.