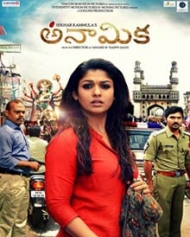 U/A | Thriller
Release Date : 01 May 2014
Cast : Nayanthara, Harshvardhan Rane
Director : Sekhar Kammula
Synopsis
Anamika is a official remake of the Hindi film Kahaani and it is a suspense thriller movie in which, Nayantara playing the title role along with Harshavardhan Rane and Vaibhav Reddy are in supporting roles.

Movie starts with a bomb blast at People’s Plaza in Hyderabad. After few months Anaamika (Nayantara), arrives in Hyderabad from Maryland, USA during the Durga Puja festivities in search of her missing husband, Ajay Shastri (Harshavardhan Rane) a software engineer in America.

Parthasaradhi (Vaibhav Reddy), a police officer, investigates the case to find Ajay Shastri. Rest of the film deals with how Anaamika finds her missing husband with a stunning twist in the climax.