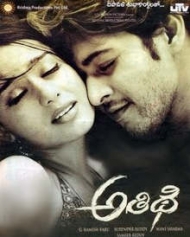 Athithi is implicated in the murder and sent to jail for 13 years. Once out, it becomes his mission to trace and kill Kaiser, the boy who had murdered Amritas parents. Obviously, the plot has lots of scope for action.

The romantic element comes in the form of Amrita who is an art student in Delhi. Though the twosome meet in Delhi, the story moves to Hyderabad and it is here the rest of the story unravels.